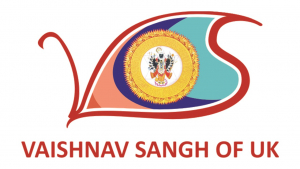 Vaishnav Sangh of UK (VSUK) was inaugurated by learned Shree Dwarkeshlalji Mahodayshri of Kadi-Ahmedabad (Je Je Shree) as the Patron, on 6th September 2009. It was registered as a Charity with the UK Charity Commission, with effect from 8th November 2010. The trustees took advantage of the new regulations and registered VSUK as a Charitable Incorporated Organisation (CIO):

The Trustees had applied for the CIO status under advice from our solicitors, being a relatively new legal structure available for charities that wish to be incorporated and the registration was formally confirmed by the Charity Commission on 15 May 2019, and the new registered charity number was granted 1183435.

The current Trustees of VSUK are:

The past Trustees have been:

Amongst the main objectives of VSUK, is the advancement of Hindu education, religion and spiritual activities. The organization follows Pushti-Marg principals in the service of Lord Krishna, principals that were established by the founder of the faith, Shree Vallabhacharya Mahaprabhuji (reincarnation of Lord Krishna), over 550 years ago.

Our Je Je is a direct descendant of Shree Vallabhacharya Mahaprabhuji, in fact the 17th generation, hence the utmost respect and regard held by us at VSUK and the Vaishnav community.

Je Je has had this vision for some years, fairly similar to Shree Vallabhacharya Mahaprabhuji – to pass on knowledge of our Pushti Dharm, to Vaishnavs, and in particular to male Vaishnavs. Je Je had felt for some time that our ladies have always been well committed to our dharm, via quite a few Mahila Mandals (Ladies) functions, satsangs etc. But such commitment has been sadly lacking amongst the men. This may have arisen from the feeling that Pushti Marg is very restrictive, very rigid, too many rules and regulations. Je Je wanted to show that these views have been wrongly founded; Pushti Marg is in essence quite simple and a loving path to follow. Hence the formation of VSUK, a vehicle to educate men, of all ages, and the youth also, and at the same time to remove the misunderstood and negative views.

To achieve this objective, we have been holding a monthly class (a satsang), since October 2009, on the last Sunday of each month, from 11am to 1pm, to enlighten the members with knowledge about our own Dharm, which we can pass onto the next generation. Because if we do not, then the generations to come will be even more desperately illiterate about our Dharm than we are. The teachers who do the presentations will have carried out extensive research on the subject matter. We have over a large number of registered members who can all attend, and there is no charge for attendance. There is material provided to the attendees and this is also loaded onto our website.